The Other Party shall indemnify E-Tuk Factory B.V. against any action based on the claim that such provision, use, adaptation, installation or incorporation infringes a third-party right.
Confidentiality
E-Tuk Factory B.V. and the Other Party shall keep confidential during the term of the Agreement and for a period of two years following its termination all information (i) provided in relation to the Agreement, that is not in the public domain and of which they become aware in connection with the Agreement, regardless of whether such information is of a commercial or non-commercial nature unless a legal obligation mandates disclosure of such information. This obligation will expire as soon as the relevant information becomes generally available through no fault of the party obliged to maintain confidentiality. Such information is solely to be used for the purpose for which it has been made available and shall at all times be kept inaccessible to third parties.
Force majeure
If E-Tuk Factory B.V. is unable to fulfil its obligations towards the Other Party on account of a non-attributable failure, i.e. force majeure, the performance of those obligations will be suspended until such time as E-Tuk Factory B.V. is able to fulfil them, without E-Tuk Factory B.V. being in default as regards the fulfilment of those obligations. E-Tuk Factory B.V. can furthermore not be held liable to pay any compensation in this respect.
If the situation of force majeure has continued for a period of four months after the agreed date of delivery/performance, both parties will have the right to terminate all or part of the Agreement, in writing, without being liable towards the other party for the consequences of this termination.
‘Force majeure’ on the part of E-Tuk Factory B.V. will in any case include any circumstances beyond E-Tuk Factory B.V.’ control, such as war, civil war, threat of war, riot, strike, exclusion of workers, transport problems, power cuts, severe weather such as storms and thunderstorms, fire and other severe interruptions, which prevent or delay the fulfilment of all or the relevant part of its obligations towards the Other Party, render this inefficient or as a result of which the fulfilment of these obligations cannot in all reasonableness be required of E-Tuk Factory B.V.
Liability and indemnification
E-Tuk Factory B.V.’ total liability for imputably failing to perform the Agreement shall be limited to compensating direct damage, up to at most the amount of the price (exclusive of VAT) stipulated for that Agreement.
10
10.1
10.2
10.3
11
11.1

12 Termination
12.1 Each of the Parties shall only be entitled to rescind the Agreement if the Other Party imputably fails to perform material obligations under the Agreement – in all cases, after having received a proper written notice of default which is as detailed as possible and in which it has been given a reasonable time period to remedy the breach.
12.2 If an Agreement which, by its nature and substance, will not end when certain conditions, acts or the like are fulfilled, has been entered into for an indefinite period of time, each of the Parties may terminate the Agreement by written notice after proper consultation and with a statement of reasons or for no reason at all. If the Parties have not agreed on an express notice period, a reasonable notice period must be observed in terminating the Agreement. The Parties shall never be liable for damages for terminating the Agreement.
12.3 Each of the Parties may partly or completely terminate the Agreement in writing with immediate effect and without a notice of default if the other party is granted a provisional or non-provisional suspension of payments, if a petition for liquidation is filed with regard to the other party or if the other party’s business is wound up or terminated for other reasons besides a business reconstruction or merger. E-Tuk Factory B.V. shall never be obliged on account of this termination to refund funds already received or to pay damages.
12.4 If, at the time of the rescission referred to in clause 12.1 the Other Party has already received performance in connection with execution of the Agreement, this performance and the related payment obligation shall not be cancelled, unless the Other Party proves that E-Tuk Factory B.V. is in default with regard to that performance. Amounts which E-Tuk Factory B.V. has invoiced before the rescission in connection with respect to already properly performed or delivered Work shall, subject to the provisions in the preceding sentence, continue to be owed in full and shall be immediately payable at the time of rescission.
13 Transfer of rights
13.1 E-Tuk Factory B.V. is permitted to transfer the rights and obligations described in any Agreement to third parties. E-Tuk Factory B.V. must notify the Other Party of any such transfer. E-Tuk Factory B.V. will not be obliged to pay any compensation whatsoever in this respect.
13.2 Transfer of obligations pursuant to clause 13.1 shall take effect upon receipt of notice from the transferee to the Other Party whereby the transferee agrees to be bound by the terms of the Agreement, whereupon the transferee shall be liable to the Other Party in place of E-Tuk Factory B.V.

14.1 All legal relationships between E-Tuk Factory B.V. and the Other Party will be governed and construed exclusively in accordance with the laws of the Netherlands and will be subject to the exclusive jurisdiction of the court of Amsterdam, the Netherlands. 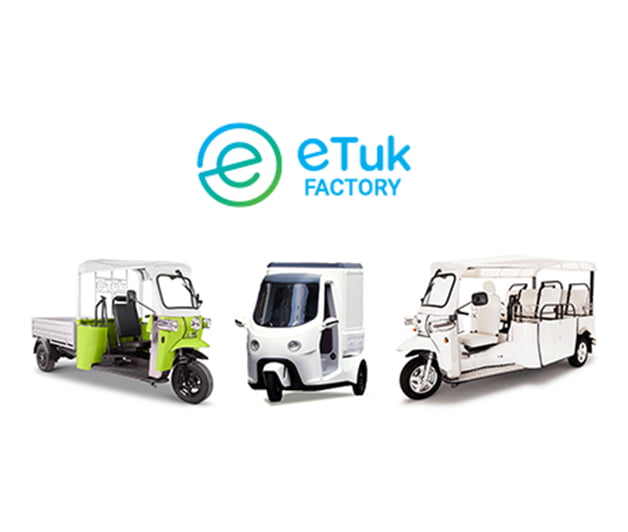 Pioneering a revolution in E-Mobility